Highlights on the Head of Customs’ visit in the Southern Region 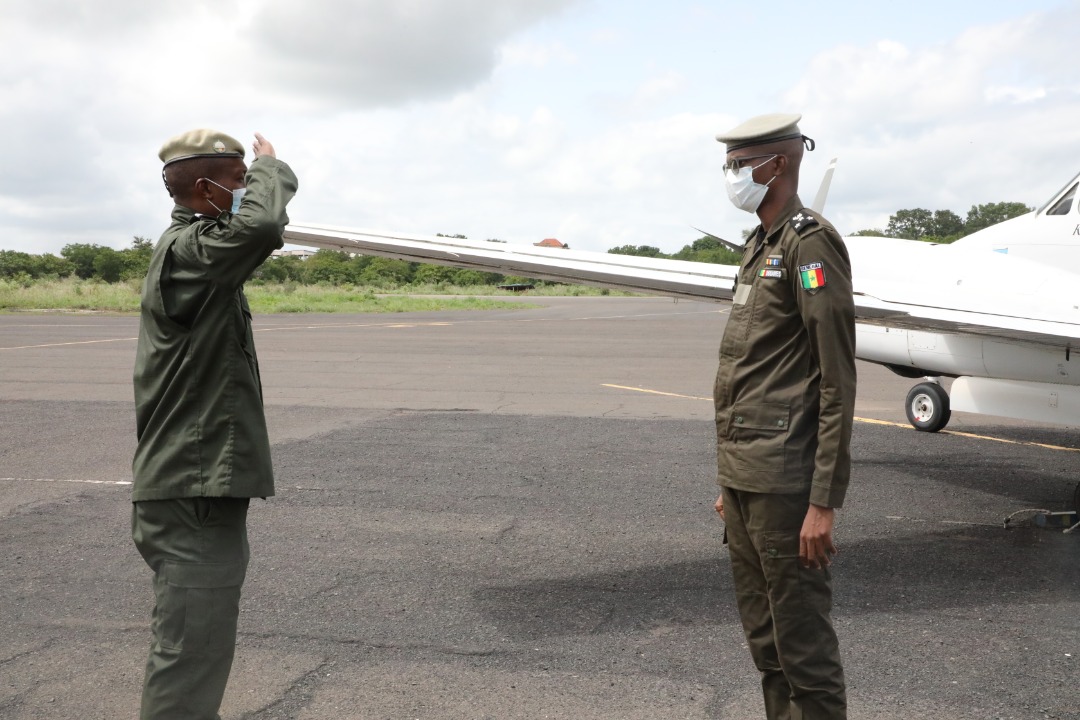 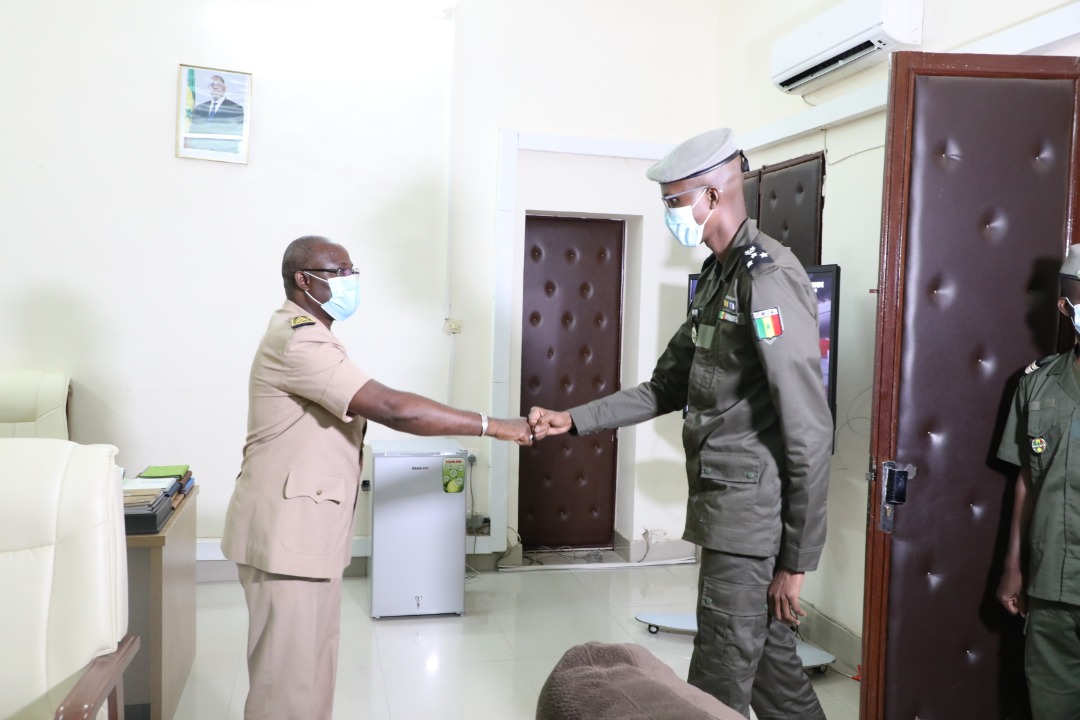 On Tuesday July 27th, 2021 at 11:50 am at Ziguinchor international airport he was greeted by the Southern Regional Director, Colonel Malang Diédhiou. The General Director then paid a courtesy visit to the Governor of Ziguinchor, Guedj Diouf.
The Head of the Regional Executive and the Customs’ General Director discussed on challenges of customs surveillance in the South. The Head of customs then thanked him for the support and interest given to the Customs’ action.
In the process, the Head of customs decided to pay a visit to religious authorities and by the way sensitized them about the importance of Customs’ missions. Thus, he was received respectively by Imam Ratib El Hadji Cheikh Tidiane Aidara and the representative of Bishop Abbot Nicolas Biagui, parish priest of Niaguis. He requested their prayers for the success of customs’ missions and their support to the southern customs’ units.

Then headed to the Southern Regional Directorate Headquarters. In situ, Colonel Malang Diédhiou, presented the overall situation of the customs’ region to the General Director and his delegation. There followed a discussion enriched by Technical Directors point of view.
The DG then, went to the Ziguinchor Customs Subdivision, the Mobile Brigade, the Port Brigade and the Port Customs’ Office.

The steps of Mpack and Oussouye

In that afternoon, the General Director and his staff stepped in the Mpack border unit and the Oussouye fluvio-maritime brigade. Wherever he went, the General Director inquired about the agents’ working conditions on the one hand, and directed and recommended them on the other hand to perpetuate culture of good job for better achievements.
The programme of the first day of the visit to the South was ended up in   oussouye.

General Director’s tour in the South: Second day step in the Séléty unit

The visit was going on, the delegation, first, stopped on Wednesday July 28th, 2021 in the Séléty unit, Subdivision of Ziguinchor, on the border with Gambia.
On his arrival, the Head of customs was first entitled to the Honors before meeting officers. This was followed by a presentation of this Unit. The General Director and the central directors communicate on the issue of the main orientations on which action must be taken on a daily work. They also welcomed the collaboration between the Séléty officers and the other FDS including the spirit of cooperation with the Gambian colleagues. Moreover, the general Director went to Gambian territory at the Djiboro Post to greet the officers who previously came to welcome him in Séléty.
Before leaving Séléty, the general Director met freight carriers operating in the area.

The general Director tour in the South: the Bignona stage

The Bignona stage started with a courtesy visit to  Imam El Hadji Ousmane Fansou Bodian.
The general Director then went to the headquarters of the Mobile Brigade where he held a working session on the dynamics in which all customs’ officers must commit themselves for a better service of quality   and more achievements.

Under a pouring rain the general Director and his delegation arrived at the Tanaff Post on Wednesday afternoon. They were greeted by the Mayor of Tanaff, Mr. Ibrahima Gomis, the Head of the Kolda Subdivision, Commander Georges Sylva, representatives of other SDFs, the Post’s officers.
Speaking, the Mayor of Tanaff welcome the general director and expressed all populations’ gratitude as the climate of peace and security favored by the dissuasive presence of the SDF. Ibrahima Gomis also magnified the harmonious cohabitation between local citizens and Customs’ officers. By the way he decided to provide Customs with additional land to support efforts for modernizing the Administration.
The second act of the Tanaff stage was devoted to the presentation of the Post, including achievements, strengths and constraints.
Addressing the Head of Post and his staff, the general director informed about the very imminent implementation of the Customs Administration Modernization Program (PROMAD). This program will considerably improve working conditions of customs officials, providing more means. The general director previously momentum set in motion by his Unit before leaving congratulated the Head of Post and his men for the good job.

The general Director tour in the South: Courtesy visits to the Kolda authorities

The second act of the third day was devoted to courtesy visits to administrative and religious authorities.
The first step led the general Director to the regional governor, Mr. Ousmane Kane. That authority expressed his satisfaction for the excellent work done by customs’ officers on duty in his constituency. He also saluted the perfect understanding of customs’ officials with populations. On this occasion, the President of the Chamber of Commerce, Mr. Chérif Diallo, complained about the opening of a Customs’ Office in Kolda. Responding to that issue, the general Director pointed out the need to consider main orientations of the Administration and that opening of a customs clearance office in Kolda, which falls within the framework of the vision articulated around “a Local Customs at the service of economic and social development”.
The Director General then visited respectively the Bishop of Kolda, the lord Jean Pierre Bassène and the Imam Ratib, Thierno Alassane Tall.
The latter magnified the Customs’ key role especially in the fight against fraud and drugs. Without customs surveillance, Imam Tall added, the country’s youth would be more exposed to psychotropic substances. Wherever the Head of cutoms went, he asked the authorities, especially the religious’ support to Customs for a good execution of services. They did not fail to pray for the general Director and the entire Administration.

The general Director’s tour in the South: Meeting with the Pata, Salikénié and Medina Yoro Foula post officers

As part of the tour in the southern customs’ region, the general Director met the Pata , Salikénié and Medina Yoro Foula post officers, all, Units of the Kolda Subdivision.
During the working session he chaired, head of staffs as well as members of the delegation, the general Director  shared his vision of the Administration in the perspective of implementing the PROMAD, and then to promote the modern tomorrow customs.
He explained to officers the main lines of the PROMAD and the targeted performance objectives. It included a consequent resources allocation to all customs’ units. The main goal is to sharply modernize the Administration over a long term. In the same framework staff regulations will be revised to establish a true culture of performance.
He praised the exemplary behavior of the agents and the satisfactory results achieved. On this occasion, the general Director to warmly congratulate the Head of Subdivision and the Regional Director for their managerial capacities which led to the noticeable achievements in the region. However, he reiterated his firm instructions for strengthening the dynamics, cult of performance of local Customs for a better understanding of the missions.
He also drew attention to the speediness in the work to respond to economic operators, because, specified the DG, social control and the application of regional and sub-regional commitments on the corridors became elements of rating of performance of the service.
Taking part in the meeting, the DCI, the Head of Customs’ Operations, and the Human resources and Logistics provided answers to the questions raised and reiterated their encouragement and  to the agents.
Previously, the Head of the Subdivision and the Heads of Posts respectively took the floor to draw up a general picture of services’ execution.
The day before, on his arrival in Kolda at around 8 pm, the general director visited the Headquarters of the Subdivision. On site, he communicated with the agents on present issues and the main axes of PROMAD. He also assisted on a presentation of the Kolda Subdivision and the Mobile Brigade.

The general director tour in the South: stage of the Vélingara Unit

The Badiara border post, between Senegal and Gambia axis and the Vélingara office and mobile brigade were visited.
The said Units of Velingara, Subdivision of Kolda, presented each one an inventory of the service and subsequently, received the authorities’ instructions and orientations concerning services’ improvement and achievements.
On this occasion authority agreed to make sure that means will be strengthened for better working and living conditions. All necessary measures are being taken to curb the problems as soon as possible.

The general Director tour in the South: the Customs’ Units of Sédhiou in the spotlight

The Director General ended his visit in the Southern Customs’ Region with the Administrative units of Sédhiou, depending to the Kolda Subdivision. Mr. Abdourahmane Dièye first went to Sédhiou to pay a courtesy visit to the Governor. There, he was received by the Deputy Governor, Mr. Modou Guèye, representing the Governor, expressed his thanks for the visit. He also expressed to the general Director the complete satisfaction of the administrative authorities considering the work carried out by the Sédhiou Customs’ Brigade. Mr. Modou Guèye received the general director and his delegation in the presence of Mrs. Ngoné Cissé, Prefect of the Sedhiou department.
The general director and his delegation then went to the Headquarters of the Sédhiou Customs Brigade.
Sénoba Post, the last stage of the tour, received the delegation. It was an opportunity for the General director to observe the exemplary nature of the collaboration between the agents of Senegalese and Gambian Defense and Security forces serving in Sénoba. After following the presentation of the Unit and providing answers to questions, the CEO and the Technical Directors including the local Chefs draw a positive assessment of the tour. The main the authority’s communications revolved around three points namely PROMAD, the new reorganization of services and the new status of agents in perspective.