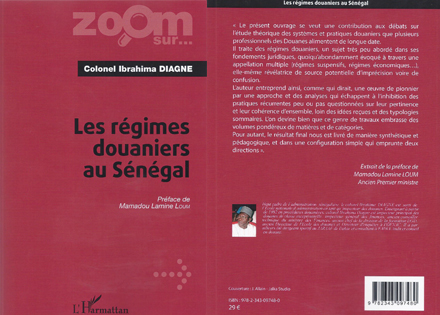 Presentation and dedication ceremony of the Book « customs regimes in Senegal », by Colonel Ibrahima Diagne on Wednesday October 12th, 2016 – at the Chamber of Commerce of Dakar (CCIAD) from 4:30pm.

He retired from a high-level executive position in the senegalese’s administration. The Colonel Ibrahima DIAGNE has graduated from the National School of Administration as a Customs Inspector, and has taught customs procedures since 1982. Colonel Ibrahima DIAGNE is a principal customs inspector of exceptionnal class, an Inspector General of Finances, former Technical Attache for the Minister of Economy and Finance, former head of the Training Unit at the Customs General Directorate and Director of Investigation at the OFNAC.

He has also been the coach of the Jaraaf team from Dakar and Consultant for “Fadia Audit et Conseil en douane”.

« the present work wills to be a contribution to the discussions on the theoretical study of customs’ systems and practices that many professionals in the field of customs have been talking about since long.

It talks about customs regimes, a matter that is little talked about regarding its legal basis, however largely discussed through a complex designation (suspensive arrangements, economic regimes…), and in itself a source of potential inaccuracy and perhaps confusion.

The author therefore undertakes, as he says in his own words, a pioneer work with an approach and analysis that escape from the inhibition of current practices that are little or not at all relevant of their consistency as a whole, far from common beliefs and brief typologies. One canguess that this type of work takes into consideration volumes of topics and categories.

Nevertheless, the final result is delivered to us in a synthetic and didactic manner, in a simple setting driving in two directions ».

Extract from the foreword of Mamadou Lamine LOUM