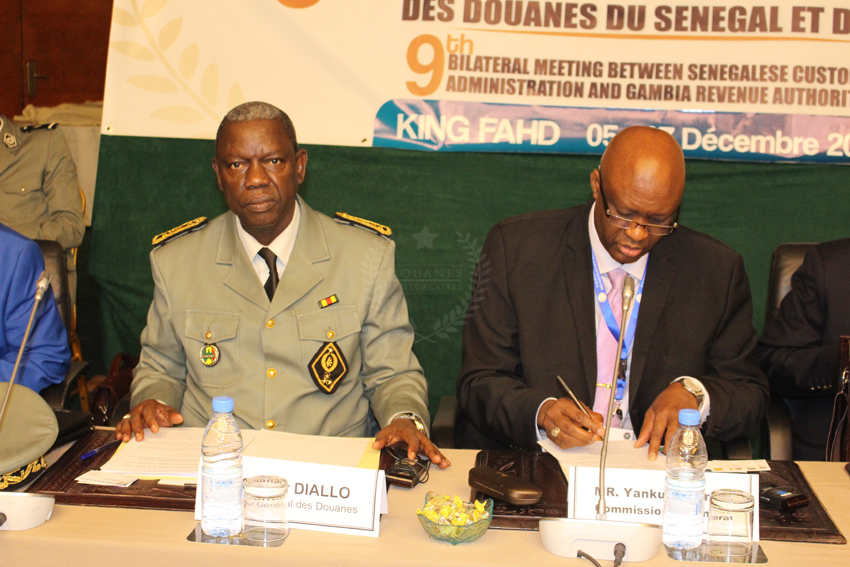 As usual, the Senegalese and the Gambian Customs Administrations held a bilateral meeting this year. Taking place from December 5th to the 7th, 2018 at the King Fahd Palace Hotel, under the chairmanship of the Senegal Customs Director General, Mr. Oumar Diallo. This meeting was the 9th held between the two administrations.
Several authorities took part in the meeting, namely his Excellency the Ambassador of The Gambia to Senegal, the representative of the Minister of Economy, Finance and Planning and Secretary General of the MEFP, Bassirou Samba NIASSE, the Director General of the Gambia Revenue Authority, Mr. Yankhuba DARBOE, the representative of the Senegalese-Gambian Permanent Secretariat and customs partners, officials and some private companies.
During this meeting, discussions were focused on border security. Within the framework of the bilateral cooperation, experts, from both administrations carried out discussions to comb out unresolved issues such as: coordinated border management, facilitation and securing trade in the Senegambia region.
At the outcome of the meeting, all main recommendations will have to be implemented with defined deadlines and rigorous monitoring as emphasized by the head of the Gambia Revenue Authority.
In this perspective of perpetuating a fruitful cooperation, the General Director of Senegal Customs, Mr. Oumar Diallo stressed the importance of implementing juxtaposed checkpoints at the borders. As part of the cross-border trade facilitation, it was agreed to sensitize licensed Customs’ brokers and informal sector traders on the use of proper declarations.
Among the priorities that have been identified one can note the strengthening of the customs procedures’ computerization for fruitful cooperation. In fact, Directors of both customs IT Services were invited to collaborate more for this achievement.
In addition to the above mentioned, to be implemented, it was strongly recommended to ensure rigorous monitoring with stakeholders working on the ground for a positive impact on populations.