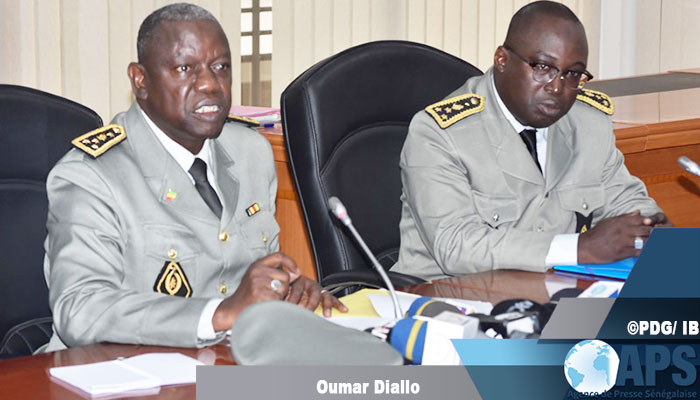 Dakar, Nov. 7 (APS) – On Tuesday 7th, the new Senegal Customs General Director has promised, a “collegial and inclusive” management of the Custom’s Administration for secured revenue and a «lasting and sustainable” growth.
“We will govern collegially, I will never make a decision alone. Together, we will discuss and assume any decision. One should bear in mind that the end of my assignment depends on the President‘s will. It may last two or six months, one or two year at most because I’m old, I had to be retired”, he explained.
He was speaking at the handover ceremony with his predecessor, Pape Ousmane Guèye.
«You are leaders, we will share responsibilities, and we will manage together for daring and decisive measures, in collecting and securing duties and taxes,” he said.
“We have a mission and we will lead together, achievements will be yours. We can only start this accomplishment in an inclusive and participatory way,” said Oumar Diallo.

The new Customs DG invited customs officers to “consolidate discipline and hierarchical authority, the only way to enforce Senegal.”
Mr. Diallo also promised “a rigorous command based on men ‘skills and that will be administered and applied to their dimension”.
“I launch people be back to work and ancient intrinsic values that have always shaped this administration, built on a motto “Improving ourselves to serve better,” he said.
Indeed, Oumar Diallo while reassuring officers about the modernization of customs administration, reminded values «criteria of competence, integrity, loyalty, fairness and justice in the sharing of responsibilities”.
According to the State General Inspector, the modernization of our administration and the dematerialization of procedures must be more secured”.
He added we will keep on strengthening partnerships with companies and other governments, businessmen, traders, importers and all users.
However, he said, this mean respecting law with a “fair, and transparent administration as far as customs operations are concerned”.
Therefore, Oumar Diallo said, on the basis of “the dynamism of customs administration, its ability to adapt, young and committed officers, led by authorities “will take responsibilities.
He promised to pay “special attention to vulnerable customs’ families for more efficient care towards widows, retirees, orphans and seriously ill persons”.
“I am convinced that you are the right man in the right place. Welcome again, “said the former general director, Pape Ousmane Guèye.