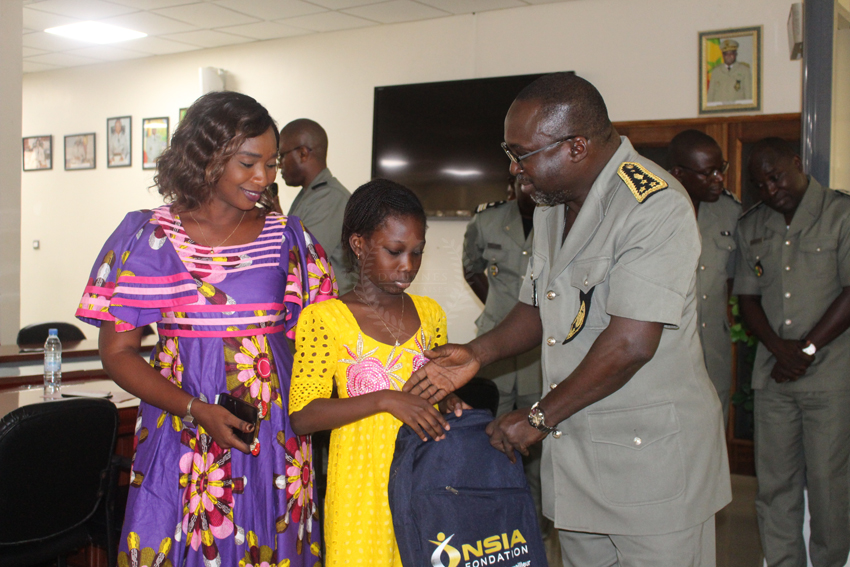 The Customs General Director has been delighted by the good management of Customs Insurance Services, created in 1997. The Insurance services is responsible for Customs agents in activity, retired or deceased family members.
Mr. Papa Ousmane GUEYE spoke, thus, on 20 September 2017, in front of young orphans who benefit from two hundred (200) school kits given by the Customs Insurance services.
Surrounded by his main collaborators, he advised children to work again in order be part of the best students.
“The Customs will never let you down,” said the General Director, “because you are our children and I was an orphan too.”
Previously, Lt-Colonel Habib Ampa Florentin DIENG, Executive Secretary of the Insurance services, recalled the Insurance services ‘ missions, before thanking the General Director for his constant support in modernizing the Mutual.
Thus, his presence at this important ceremony which magnifies the special attention the customs hierarchy attaches to this particularly fragile part of our family, hopes for the future, through the Orphan Child Relief Fund (FOSEOR).
Before wishing a good school year to the children, the Executive Secretary of Executive Secretary of the Insurance services, thanked all partners who supported him in the acquisition of kits.
After the ceremony of delivery of school kits, Mrs. Aicha MBOW, President of the Customs Widows Association, thanked Customs’ authorities for the special care, and constant support they received from them.