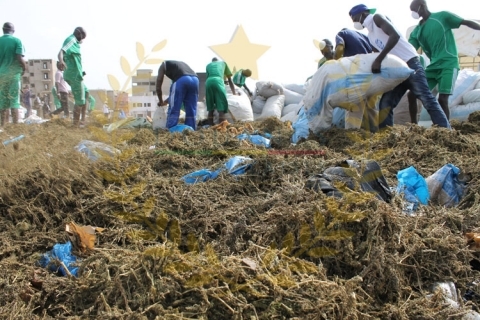 Tambacounda, Apr. 12 (APS) – 300 kilograms of drugs and 3.7 tons of false medicines estimated at CFAF 2,264 billion were incinerated on Wednesday 12th in Tambacounda. This action was headed by, El hadji Bouya Amar, the governor this region.

“300 kilograms of drugs, including 25 kg of methamphetamine and 250 kg of cannabis, counterfeit medicines weighing an estimated 3,720 kg, for a total value of 2,264 billion CFA francs,” said Commander Oumar Baldé, head of the Tambacounda Customs Subdivision.

These prohibited products were seized by the Customs from November 2015 to January 2017, on the roadblocks of Tambacounda, Koumpentoum, Gouloumbou, or during bush operations on the basis of information obtained. Almost all the medicines came from Gouloumbou and Koumpentoum, he said, adding that the drug was seized at Koumpentoum.

At least 100 kilograms of cannabis were discovered on people crossing the border in the bush by bicycle. The presumed drug traffickers were arrested and some of them stood a trial. Others are awaiting their turn to trial and another group disappeared in nature.

The alleged traffickers are “mainly Malian and Guinean and some Senegalese people,” pointed out Commandant Baldé. “This is a worrying phenomenon,” he warned. It is therefore necessary to “increase vigilance” as far as illicit products, entering the country the country, are concerned.

In the same vein, he assured that the Tambacounda customs subdivision, famed for its recurring seizures of drugs, intends to perpetuate the control. “The demand for hard drugs is a reality in Senegal,” added Commander Oumar Baldé while to explaining the growing of seizures of this type of narcotic. He stressed that Senegal is also a “transit country” where drugs transit to developed countries.

Dr Abdoulaye Diop, while representing the College of Pharmacists, noted that none of incinerated drugs come from either the public or private supply chain.

He warned about the dangerousness of these counterfeit medicines, which bear no indication about the identity of the manufacturer’s laboratory, no bar code or expiration date. Imported most of the time from China, Thailand, Nigeria, and these fake drugs are made up of anti-tetanus serum, corticosteroids, etc., he explained. Hence the “upsurge of kidney disease,” said the pharmacist.

Speaking to the judiciary authority, he complained the fact that «traffickers are still faced with a fine”, because of a law that is “not sufficiently repressive». He recommended that illicit drug trafficking should be considered a customs offense and therefore should punished as such.

According the governor, who symbolically set fire to the illicit drugs, this important seizure of methamphetamine, “one of the most dangerous drugs in the world”, testifies that there is a “local consumer market” and an “exportation market”.

He brought up the consequences of drug use, considering that the high presence of mental patients between 16 and 25 years old is partly related to drug use. Therefore “We received directions to amplify the struggle at Tambacounda level, as everywhere in Senegal,” he said.

Underlining the “complexity” of this struggle which must be done “very often”, he highlighted efforts made by the State to adapt to the perpetually renewed artifices of controlling traffickers. Incinerated products represent only seizures of customs, but not the police, gendarmerie and the prosecutor’s office, explained the governor while announcing another incineration of illicit products, “by the end of April 2017.