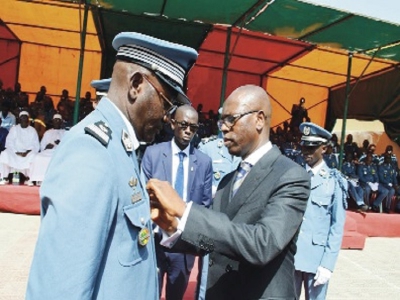 The Deputy in charge of Budget chaired the customs decoration ceremony on Tuesday 4th 2017. On this occasion, Birima Mangara congratulated the customs for their part played in protecting environment.

Just after the civilian and military parade at Place de la Nation, soldiers of the economy met at Point E district to honor some distinguished agents. Some 39 agents including the workforce, retired and external collaborators received the customs medal of honor. The decoration ceremony was chaired by Birima Mangara the Minister in charge of Budget.

According to Mr Birima Mangara, the agent’s commitment and professionalism in executing their missions, gives satisfaction for their contribution to the budget and revenue mobilization and the protection of our economy. Commenting on this year’s theme, “the Role of defense and security forces in the environmental protection,” Mr Mangara argues that, it is a vital question to respond to the Complexity of the environmental problem by a coherent multilateral management, mobilizing every actor concerned should be put into place. According to him, so far, the international community is striving to meet this challenge with a more resilient governance. He recalled that the World Customs Organization (WCO) has developed several measures and strategies to address these challenges. On the national level, the Minister for the Budget added, the customs administration implemented international regulations that are directly applicable and which contribute in the internalization of those requiring accession with services concerned. As far as the issue of layer ozone degradation stressed that Senegal had ratified the Washington Convention on International Trade of Endangered Species from Wild Fauna and Flora and the Montreal Protocol related to Substances that deplete this layer.

He explained that the Ministry of Finance is represented by the customs administration in the National Ozone Committee and therefore participates in adopting strategy dedicated to the protection of the ozone layer. Birima Mangara said that this administration stays at the forefront of defending the act that bans non-represable plastic bags of low micronage. For the protection of our forests, the Minister of the Budget campaigned for a joint action to fight illegal logging. It urges customs officers to effectively fight against this scourge. At the decoration ceremony, Mr. Mangara, invited the recipients to find in distinctions an additional source of motivation. He urged the other staff members to perpetuate in this commitment.

As for Pape Ousmane Guèye, Director General of Customs, he said that customs services beyond their traditional missions have always worked to preserve the security of the national territory. According to him, an important aspect remains: the environmental aspect to be impart to all agents.