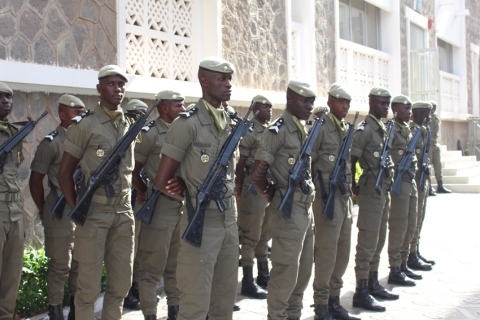 in the Framework of his first contact with Defence and Security Forces, the National Navy’s new Chief of Staff,  the Rear Admiral Momar Diagne and his staff visited, on Tuesday September 6th at 10 am, the Customs General Directorate.

Along with his main co-workers, CustomsDirector General  Papa Ousmane GUEYE, right after thanking his guest of the day for this mark of strong bonding between Navy and Customs showed throughout this friendly visit, has raisedseveral common points from the Protocol Agreement between the Customs general Directorate and the Army’s Navy forces.

On that point, the fight against offshore smuggling can only be efficient with a strong pooling of navy ressources from both administrations.

Therefore, Common missions are planned in other to face threats such as terrorism, piracy, illegal fishing, and to plan ahead furture actions of Senegal’s offshore gaz and oil fields.

Both delegations specially discussed, under the chair of the Customs Director general and the Rear Admiral, about the following :

– the improvement of the fight against counterfeit mechanism ;

– the maintenance of speedboats with the extensive refit, planned in France, of the two shuttles Djiffer and Sangomar, followed by others of 12m and 7m based in Dakar and the regions ;

– workplace restructuring supported by a technical monitoring by the Navy and an administrative follow-up by the appropriate Customs services ;

– data and intelligence information interchange between the Navy’s services, particularly the Coordination Cell for Operations (CCO), and the Customs’ intelligence and control units, as well as the placements of navy staffs in the Customs.

The visit ended with a cocktail offered by the Customs Director general to his guests.