8 th bilateral meeting between Senegalese and Gambian Customs in Banjul 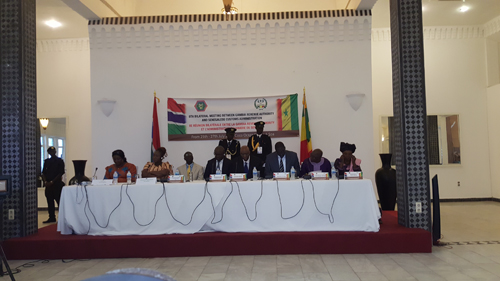 The eighth bilateral meeting between Senegalese Customs and the Gambia Revenue Authority (GRA) opened on Monday July 25th 2016 in Banjul, at the Coco Ocean Hotel. Under the chairmanship of Mr. Papa Ousmane Gueye, the General Director of Senegal’s Customs administration and Yankuba Darboe, General Commissioner of the Gambian Revenue Authority.

Several authorities of both countries were part of this important meeting as a way of enhancing cooperation relations. Regarding the Gambia, one can note the presence of the Minister of Trade Abdou Jobe, representatives of the Ministers of Interior, Finance and Economic Affairs, the Foreign Affairs, Justice, took part along with the Gambian Revenu Authority (GRA) Board.

For three days, experts from both administrations had discussed about customs’ issues related to trade.
This meeting is expected to encourage both administrations to discuss issues related to the sharing of information in real time, in order to fight against commercial fraud, in all its forms and transnational organized crime.
The next bilateral meeting will be held in Dakar. Meanwhile, the Technical Committee will have the opportunity to monitor the implementation of various recommendations emerging from this meeting that will end on Wednesday, July 27th.