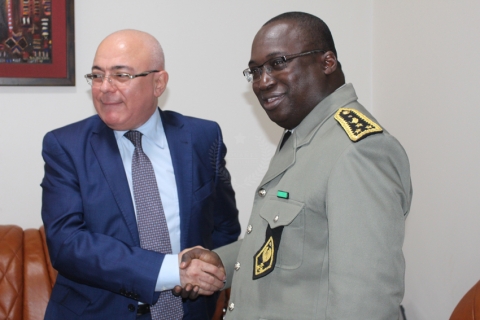 Within the framework of bilateral cooperation, the Senegalese Customs Administration has hosted the Republic of Azerbaijan’s Customs State Committee delegation on Wednesday May 18th, 2016.
The purpose of this visit was to sign an agreement on Mutual Assistance in Customs’ Capacity Building betxeen both countries.

In the presence the Executive Committee members, the official ceremony has been chaired by the General Director of Customs, Mr. Papa Ousmane Gueye. The Azerbaijan delegation was headed by the Chairman of the State Committee Mr. Aydin Aliyev, Head of International Cooperation Department, Mr. Dilavar Farzaliyev and his deputy Mr. Kamran JABBARLI.

Mr. Aliyev praised the bilateral cooperation established since the visit of the Senegalese Customs delegation in Azerbaijan, in 2014. In his opening address, the General Director of Senegal Customs welcomed the choice of Senegal as a partner, which he considers as an honor. In the same vein, the customs authority magnified willingness to increase efforts and meet challenges related to international trade marked by “speed requirements” in the Customs current modernization context.
The sharing of expertise and experiences between Senegal and Azerbaijan, according to the Senegalese Customs General Director, will help to achieve the goals set by both nations, signatories of this agreement.

The Head of International Cooperation Department, Mr. Dilavar Farzaliyev, expressed the desire for his administration to welcome back the Senegalese Customs in Azerbaijan.
After the speeches the audience was taken to a virtual journey into Azerbaijan, throughout the video presented by the delegation one could move from culture to worship; through economy and history of that brother nation. It was then recalled that Baku, capital of Azerbaijan, is represented symbolically in the list of Dakar public places. In this warm and diplomatic atmosphere, gifts were exchanged, reflecting further cemented bilateral cooperation.

After the presentation of the host delegation, the head of International Cooperation office, Mr. Mouhamadou Sall, presented the Senegalese Customs Administration through its various missions.
The Customs’ Information System’s Director, Mr. Alioune Dione, showcased the modernization of the Senegalese Customs throughout the presentation of the dematerialization process and the platform GAINDE.
Finally, a video on the country of Teranga was presented to the Azerbaijani delegation, presenting its potential and specific resources.
The Senegalese Customs set a significant milestone in the field of international cooperation what embodies once again the motto «Improving ourselves to serve better. »