More than one and a half tonnes of Indian hemp seized in Fimela, Nianing, Fatick and Kaolack 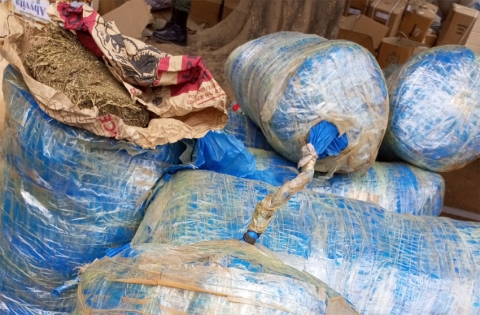 Mbour and Fimela Maritime Customs’ Brigades Kaolack and Fatick subdivisions seized significant prohibited products between June 1st and 8th, 2021. There were 1,683 kilograms of hemp Indian seized between the Petite-Côte, Fatick and Kaolack.

The first seizure was operated on Tuesday, June 01st, 2021 by the Fimela Maritime Customs’ Brigade of bolongs. The product was 225 kg of Indian hemp carried by canoe. Drugs were packed in 9 packages of 25kg each. The Indian hemp was estimated at 17,175,000 CFA francs. The canoe and the engine were also seized.

Later, on the night of Tuesday June 01st, 2021 at around 11 p.m., the Mbour Maritime Customs’ Brigade seized 370 kg of Indian hemp in Nianing, a stone’s throw from Cub Aldiana. Traffickers, aboard a canoe, were attempting to dock with goods when customs’ officials stopped them. The total value of drugs and the canoe were estimated at 30,160,000 CFA francs.

72 hours later, on Friday 4th June 2021 around 10 p.m., Fatick Customs Mobile Brigade, Central Region, intercepted 375kg of cannabis in Samba Dia, within the district of Fimela. Indian hemp was packaged in 07 packages of 50kg each. The seizure was carried out following a spinning. The customs’ officers tightening on him, the trafficker ended up leaving the cart and the drug shipment in the Samba Dia forest. The total value of hemp is estimated at 30 million CFA francs.

Within the same customs central region, the Kaolack Subdivision Units seized between June 5th and 8th 713 kg of Indian hemp for a total value estimated at 57,040,000 CFA francs.

Several individuals were apprehended during these operations.

Customs’ Administration, again, calls on the populations of islands and areas of tourist interest to collaborate for a more effective fight against illicit traffic because it impacts on the economy, health and the development of the land with harmful consequences.