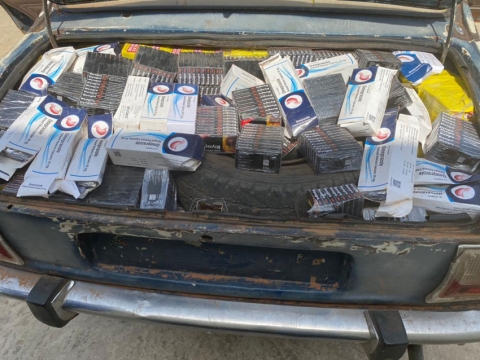 Last weekend several operations have been carried out. In fact Customs’ Units operated as well on the Keur Ayib – Kaolack and Keur Ayib -Nganda axes as in the traffickers’ withdrawal areas, namely in forests and swamp areas of Kaolack, Kaffrine and Fatick regions.

These operations allowed to intercept and seize:

This seizure composed of analgesics, aphistamines, antihistamines, and anti-inflammatory drugs, was operated around 5 a.m. during a chase initiated by the Kaolack Subdivision officers.

The traffickers eventually fled, leaving the vehicle at the entrance of Ndiaw Bridge. The total value of the counterfeit drugs is estimated at 38 million CFA francs.

• 22 kg of Indian hemp and ammunition;

These prohibited products were hidden in an unauthorized deposit in the forest, near Yongo (Nioro department). It was probably intended for flow areas by sedans.

• 528 cases of aphrodisiacs and the means of transport were seized, precisely in Diama Thiéwi. In fact, during these last years the Customs’ Administration, strengthened its means for the fight against smuggling and drug trafficking, considered as a global scourge.

During these same operations, the Kaolack Mobile Customs’ Brigade seized 554 bales of plastic bags, weighing each one 12 kg each as a total of 6,648t. Bullets were hidden in the compartments of a truck coming from Mali. Both goods and the means of transport were estimated at 36,620,000 CFA francs. Three individuals were arrested.

Under the enforcement of the law prohibiting the single-use plastic products importation, the Dakar Port Nord Customs’ Office and the Mole 8 Customs Commercial Brigade seized:

During a road check in Toglou on the toll highway, 1,136 plastic bag slips was picked up by GPRR agents

In the same vein, Nganda Customs’ officers seized 3,300 bags of fertilizer, or 165 tons.

First of all, the Fatick Mobile Customs’ Brigade seized 06 parcels of 25 kg each, or 150 kg of Indian hemp. This operation took place near the village of Yayém in the vicinity of Fimela. 5 individuals were arrested.

Another combined delivery controlled operation allowed the Bignona Customs Brigade (South Direction) and Keur-Ayib (Kaolack Subdivision) to pick up 500 kg of Indian hemp buried in hay bags on a heavily loaded truck. Four individuals including the driver of the truck were apprehended.