A Weekend of High impact operations! 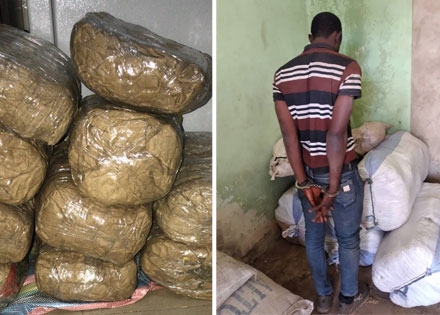 More than 1t 400 kg of Indian hemp seized on the Petite Côte, in the Center and the South

Within the framework of combating smuggling activities, the Customs’ Administration is constantly revitalizing its national surveillance system.

Therefore  the Multipurpose Group for Research and Repression of Fraud (GPRRF), a unit with national competence of the Customs’ Operations Department, settled in Thiès, carried out the “punch” operations. This punch operation covered the Petite Côte having and allowed to seize 774 kilos of cannabis called Indian hemp transiting by sea and unloaded overnight.

On Saturday March 27th, 2021, the Nioro Mobile Customs Brigade agents stood out by catching 400 kg of Indian hemp in the forest of Keur Mboucky.

By that time 232 kg of Indian hemp were also seized in the South by the Sédhiou Mobile Customs’ Brigade (129 kg), and that of Kolda (103) kg. All these seizures are estimated at 112,480,000 CFA francs. Individuals were then arrested and handed to justice during that operation.

Fighting against organized cross-border crime and the protection of our country against smuggling activities, which is harmful for the health of populations and the national economy, remains a key mission of customs.