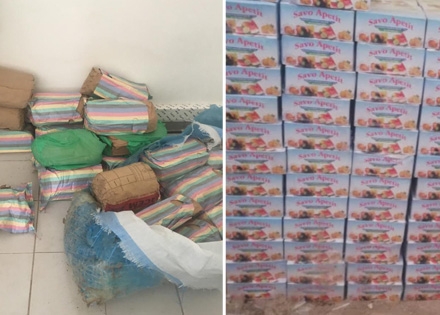 Within the fight against cross-border organized crime, Kaolack Customs’ Subdivision agents, in collaboration with GPRRF of Thiès, seized large quantities of Indian hemp and drugstore’s products.
At first eight (08) packages of Indian hemp “Green”, weighing 400 Kg was seized. The drug was intercepted around 3:30 pm, on Monday, February 01st , 2021, in the Paoscoto forest by the Mobile Customs Brigade of Nioro du Rip.
At earlier moment, the GPRRF, a customs’ unit based in Thiès intercepted a horse-drawn vehicle loaded with six bales of 150 kg Indian hemp during a monitoring operation in the Petite Côte.
Another seizure was also carried out in the Ngazobil forest, in Joal. The two seizures’ operations are worth CFAF 44,000,000.
Concerning the fight against fake drugs, 5,000 boxes of Viagra (aphrodisiacs) and several other types of counterfeit drugs including large quantities of antibiotics were seized by the Kaolack Customs Mobile Brigade during the night of Saturday 30th January 2021.

The product was transported in a Peugeot-type sedan brand. The vehicle was stopped by Customs’ officers in a classified forest located in the Kaffrine Region following a chase along the Baobolong. The drug inventory is still ongoing. Their value would amount to several tens of millions of CFA francs.