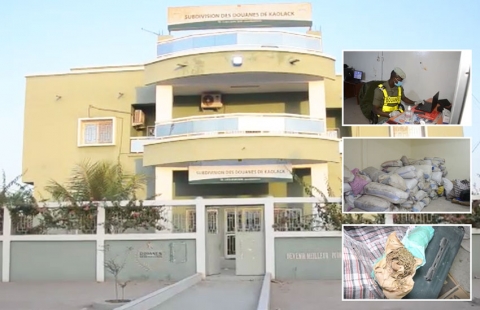 Customs revenue: Nearly 10 billion CFA francs mobilized in 2020
Kaolack, Jan 26 (APS) – The regional customs’ brigade of the area covering Kaolack, Fatick, Diourbel and Kaffrine mobilized in 2020 nearly 10 billion CFA francs in budgetary revenue, revealed the head of the Customs subdivision, in charge of the regional director’s interim, Colonel Mame Assane Cissé.
“Despite of a very difficult context of the covid-19 pandemic the management of the center region was able to mobilize nearly 10 billion CFA francs in budgetary and non-budgetary revenues, for 2020 “, he stressed, on the occasion of the International Customs Day.
According to him,  “these performances were achieved thanks to several endogenous and exogenous factors, namely a good control of the tax base, a good handling of goods, a rigorous application of the reference values and an excellent surveillance of the customs territory ”.
“A very dynamic participation of economic operators was also noticeable in the region”, congratulated the head of the Kaolack customs’ subdivision.
“In addition, in terms of fighting against fraud, we noticed that transnational organized crime is increasing worryingly in this central area which constitutes a crossroads”, lamented Colonel Cissé.
In addition to the large seizures of common products such as oil, sugar and vehicles “significant quantities of narcotics and medicines were also seized in 2020” he said.