Fight against fraud and smuggling: Wine and oil seized at the Port of Dakar and An operation to close the fraud corridors at the Center 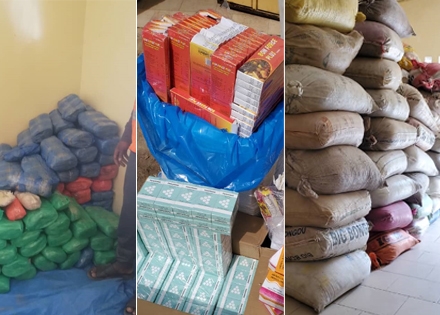 Wine and oil seized at the Port of Dakar

The Dakar Port Customs’ Subdivision seized 1,361 cartons of wine originating from France. This wine fraudulently declared as fruit juice, is estimated at 57,397,000 CFA francs. Another operation enabled the same unit to stop an attempt to discharge on the domestic market 6 containers of oil with an estimated value of CFAF 82,500,000. Individuals attempted to clear these goods by using false transit documents.

2.Operation to close the fraud corridors at the Center

This operation took place during December. This in-depth control of passengers and goods was operated on the Toubacouta-Saboya and koungheul-Maka Gouye axes. This included also a formal ban on the issuance of sugar tolerance at Karang and Keur Ayib Customs units.

The strategy allowed officers to intercept a truck from The Gambia registered in Senegal carrying 20 tons of sugar. These seizures took place on December 20th, 2020, round 5 a.m., in Khossnan, at the Makka-Gouye Customs Post, Kaffrine Subdivision, and Central Customs Region. The conveyors packaged the sugar in 400 bags concealed in peanuts. The seizure was estimated at 23 million CFA francs.
In the same wake, the other Units of the Center were illustrated by important seizures of fraudulent goods:

• 589 kilograms of Indian hemp valued at CFAF 42,160,000;
• 55 packages of fake drugs whose evaluation is underway;
• 833 bags of sugar estimated at 20.582,000 CFA francs.
Several individuals were arrested during the above-mentioned operations.