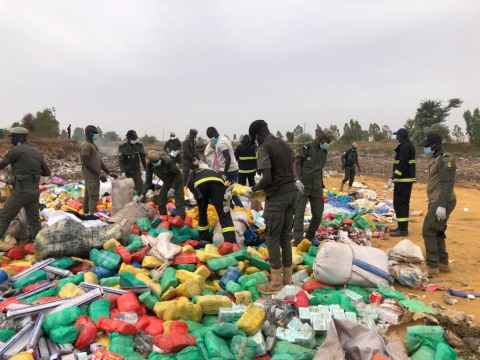 On Tuesday “More than three tons” of Indian hemp and fake medicines incinerated in the presence of the governor of Fatick, Seynabou Guèye, and customs authorities of the subdivision,  informed the “APS”.

The incinerated products, as far as Indian hemp is concerned, is more than three tons, valued at 184 million 205 thousand CFA francs, according to a customs source.

The estimated value of fake medicines is at 76 million 867 thousand 587 CFA francs.

“The incineration of these prohibited products (…) demonstrates constant customs efforts to combat this trafficking,” said the governor.

“It also shows another face that we deplore, that of drug trafficking and fake medicines,” she added in the presence of Colonel Ndèye Fatou Ndiaye, head of the local customs subdivision, and the Fatick District Court prosecutor Abdou. Aziz Danfakha.

Ms. Ndiaye called on local populations to “closely collaborate” with the defense and security forces, to combat the  trafficking in narcotics and fake medicines.

She believes in the necessity “to keep on educating the youngest on the dangers of the use of these prohibited products, to avoid its overspreading”.

The cremated products were seized in several places in the region, according to the head of the customs subdivision.

Drug trafficking is most prevalent in the Saloum Islands and other parts of the region near the border with The Gambia, she precised.

“The commercial brigade of Karang, the maritime brigades of Toubacouta and Foundiougne carried out significant seizures,” she said, stressing that this illicit traffic is practiced by Senegalese and foreigners.

Among the traffickers, one can mention minors, women and senior citizens according to Colonel Ndèye Fatou Ndiaye.

The Indian hemp and the fake medicines seized were cremated at a site on the road to Diakhao, three kilometers from the town of Fatick.