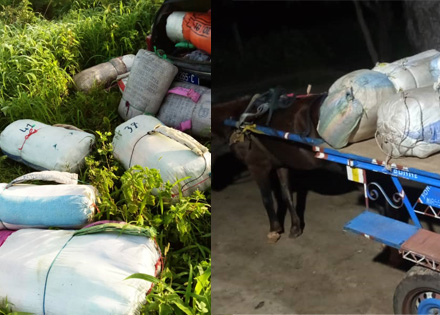 During two operations carried out in the department of Foundiougne, Central Region, the Fatick customs’ units, seized 456 kg of Indian hemp.

The first operation was carried out by the Karang Customs Commercial Brigade on Tuesday, August 25th, 2020 around 9 a.m., at the edge of the Fatala forest behind of Samé. The traffickers known as “carriers” are said to have conveyed the drugs by canoe before disembarking in the vicinity of Missira. They then ended up their journey by foot towards the Fatick bush. To thwart surveillance, “the parcel carriers” took breaks by hiding the fraudulent goods in the bush, and went to localities and got back to pick up the goods at a late on the night. They thus planned to come back by taking other ways. Regular Fatala forest sweeps enabled customs’ officers to discover the Indian hemp made of 10 packages and weighing 246 kg in total, concealed in the bush.

The second operation carried out by the Maritime Customs Brigade of Toubacouta aimed at stifling drug trafficking by sea and inland waterway. In so doing, the road was blocked to porters and traffickers on mobile devices. Thus on Tuesday August 25th, 2020, a team was intercepted at around 8:30 p.m. In fact they were carrying 06 packages of Indian hemp for a total weight of 210 kg. The seizure took place not far from Nioro Alassane TALL village, on the track connecting Keur Saloum Diané and Toubacouta.

All these actions stemmed from the framework of special operations to dismantle networks and corridors of international drug trafficking, stolen vehicles and prohibited products.