Illicit traffic fighting: The Southern Customs’ Units in the crusade against traffickers on motorcycles 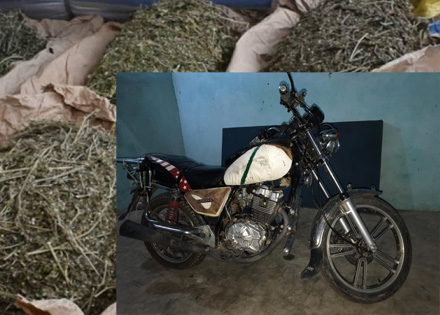 The seizure resulted from an operation mounted in the bush, at the edge of Fass-Ndiaye in the Bounkiling department. In ambush all night from Saturday 27th to Sunday June 28th. Agents seized goods around 1:PM. Feeling the customs trap, the trafficker who was traveling at high speed abandoned the motorcycle and the goods and disappeared into the forest. At the final count, a baggage consisting of 30 kg of Indian hemp and the motorcycle have been seized.
It should be noted that if in the center, revamped and fortified jets are used for traffic, in the South two-wheelers are their favorite means of transport fraudulent goods. Customs officers are facing. Light and suitable for the environment, two-wheelers are all the rage along the border.
Except that the first customs lines have engaged the crusade against “motorcycle traffic”. As proof, forty motorcycles are currently immobilized by the Customs Subdivision of Kolda.  All intercepted for reasons of various customs offenses, including that of drug.