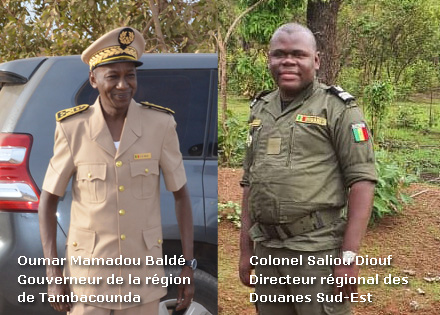 In a letter addressed to the Customs Regional Director, the Governor of the Tambacounda region saluted the commitment and professionalism of the Southeast Customs contribution to the fight against the pandemic COVID-19.

According to Oumar Mamadou BALDE, “The Tambacounda region managed successfully to stem the epidemic thanks to the commitment” of all the Defense and Security Forces, especially Customs”. From the closing of our borders to the region’ closure, including the application of curfew measures, you played a decisive role in protecting our populations”, magnified Governor BALDE. Moreover he was delighted by the key role played by the Regional Committee for the Management of Tambacounda Epidemics in response to the pandemic. He thus concluded by insisting on “the republican and patriotic posture” as well as the “high sense of responsibility” the Defense and Security Forces showed in this fight against COVID-19.

In response, the Southeast Customs Regional Director, Colonel Saliou Diouf, reaffirmed his commitment to work along with the Governor, in perfect synergy with other Defense and Security Forces. He stressed that the long appreciation of the work carried out by customs’ officers “constitutes, for each agent, an additional reason to keep on being vigilance and compliance with instructions”.

During the audition, the defendant designated a foreigner as the owner of the prohibited goods. The latter has been arrested and put under interrogation. Both of them are currently in police custody. The investigation is carrying on.