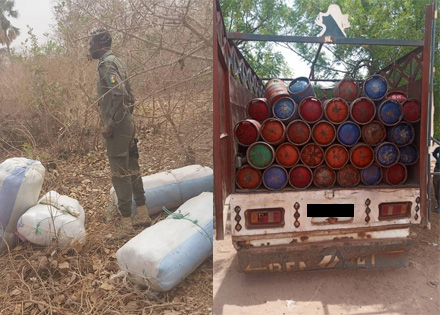 On friday June 12th, 2020 around 4pm, the Nioro Mobile Brigade, Subdivision of Kaolack Customs, Central Region, seized 200 kg of Indian hemp, named “Green”. The drug was in 4 packages of 50 kg each inside backpacks. The traffickers, known as “Conveyors”, had hidden the drug under dry grass to trick customs’ agents. They had planned to collect the product and sell it after the raking operation carried out by the Nioro du Rip’s Brigade, in the community forest of Paoskoto. But they failed thanks to                              the customs agents’ determination. A meticulous excavation of this part of the forest allowed to discover the hidden packages they seized. The total value of the prohibited goods is estimated at 16 million CFA francs.

The Nioro du Rip Customs Brigade recently seized 98 kg of Indian hemp and a significant quantity of sugar hidden in a load of butane gas bottle.

With borders ’closure and the stopping of cross-border transport linked to Covid-19, traffickers seem to use more and more of these old but less frequent practices, so-called “Carrier” method. These individuals packaged the prohibited goods in the form of backpacks. They bring them into the customs’ territory on foot by tracks and paths along the borders. The Senegal customs’ surveillance services have thus tightened the noose around these traffickers known as “conveyors”.