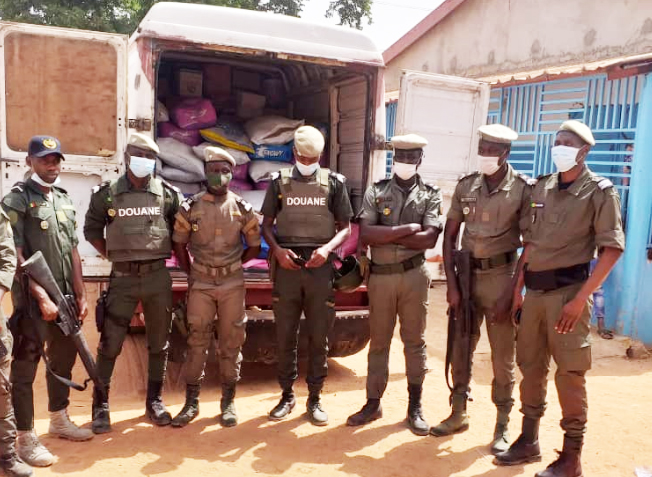 To better secure the domestic market, within the context of COVID-19 response, the Senegal Customs launched “The COVID-19 Special operations “. This operation aims at ensuring the surveillance and control of the flows of goods at the borders and within the customs’ territory.
This is to secure the market by suspending importations and exportations for a while for basic commodities, but also by a reinforcement of the system for combating goods’ fraudulent movement at the borders and inside the customs’ territory.
Triggered since one week, these operations allowed  the seizure of:

– 2400 boxes of 48 cans of condensed milk without sugar and 1800 boxes of candy loaded in a truck from Gambia. As it was crossing Vélingara, the truck was intercepted in Colobane of Gossas by the Thiès Customs’ unit known as the “GPRR”. The seisure is estimated at more than 20 million CFA francs;
– Another major operation led by the Ziguinchor Customs Subdivision and supervised by the Regional Director, Colonel Malang Diédhiou, allowed the seizure of various products: oil, sugar, rice, milk and pasta worth 5 million CFA.

–    In Kaolack, it’s 7 tonnes of sugar in 140 bags hidden in peanuts that were seized by the Pont Sérigne Bassirou Mbacké Mbacké Mobile Customs Brigade. The seizure is worth 9 million CFA.
–
One should note that uncontrolled fraud and handling operations can be a source of Covid-19 contamination.

This partly justifies the operations carried out in the Bignona department, precisely in Sindian.
These actions are part of measures taken in the framework of facilitation, support to the private sector and the populations, as set out by the High Authorities in the Economic and Social Resilience Program.