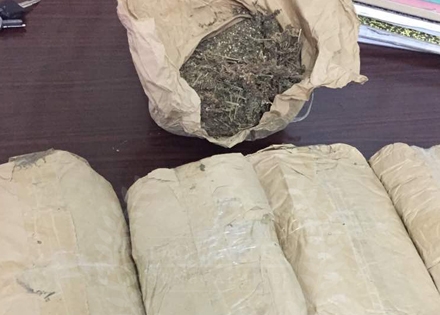 On Tuesday 06th April 2020, two seizures were carried out by the Kaolack and Matam customs’ units. With a cumulative amount of 407.5 kg of Indian hemp, the two operations took place simultaneously at 2 a.m.
The first one was operated in the department of Nioro down to the Keur War forest. The five packages of “Brown”, weighting 50 kgs each are estimated at 20 million CFA francs. The operation was led by the Keur Ayip Customs Commercial Brigade, Kaolack Subdivision
The other operation took place in Ogo near Ourossogui. It was carried out at the same time by the Matam Customs Mobile Brigade. The seizure is estimated at 157.5 kg of hemp, hidden by traffickers in the outskirts of the locality of Danthiady. Feeling that officers grip on them, thugs preferred to set up a makeshift in the woods to hide the prohibited goods in order to get back and recover them later, neglecting the officers’ flair. 18 million 900 thousand CFA francs is the considered value of this seizure.
Within the context of respecting measures established by highest authorities to break the chain of the coronavirus contamination, Customs’ Units have strengthened the Surveillance including faster  controls.
The established system allows to consider both goods and people who would break into the closed borders closings. The units on the front lines multiply the patrols in synergy with other Defense and Security Forces. The health crisis does not in any way affect the vigilance of the Customs Units.

A response protocol against the Covid-19 which includes all the border management issues was also set up by the Customs General Directorate for the execution of the service within the actual context.