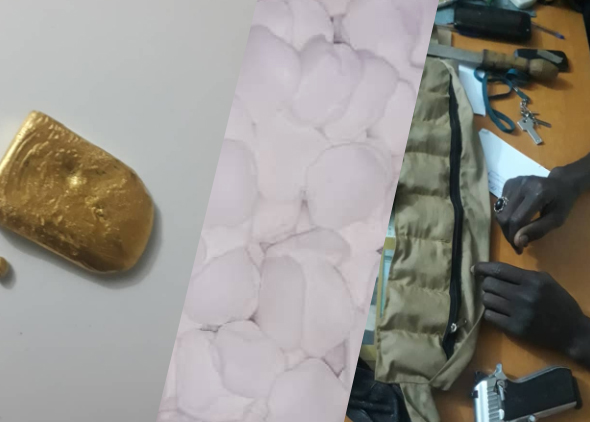 During an inspection and a controlled delivery operation, the Customs Brigades of the Kedougou Subdivision, located in the South-East Region,  seized gold and cyanide.
On Wednesday, February 12th, 2020, at 2 a.m, the Mobile Customs Brigade seized 1.444 kg of raw gold worth 33 million 200 thousand CFA francs, on a bus licensed in Mali departing for Bamako via the South corridor. Three defendants, a Malian, a Senegalese and a Burkinabé were apprehended. The procedure is being carried on.
On Thursday, February 06 at 01:00 am, the same officers had stopped, a delivery of 135 kg of Cyanide. This highly toxic product, is used in gold panning sites. The cyanide was packaged in bags hidden at the bottom of a refrigerated truck.
The controlled delivery operation was successful thanks to a synergy of action between the Mobile Customs Brigade of Kédougou and the Mobile Customs Brigade of Saréya under the supervision of the Kédougou Prosecutor’s Office. The owner, a Burkinabé and the conveyor, of Senegalese nationality, were also arrested and left to the justice the disposal.
Thus the Kedougou Subdivision Customs Units increasingly seizes chemical products such as cyanide and mercury as well as sticks of dynamite and ignition wicks.
Used in illegal gold mining sites, these dangerous products can impact negatively to the environment and populations health.
In addition to customs offenses by introducing fraudulent products, traffickers also commit environmental and health crimes. Customs thus contributes to the protection of the environment and the safeguarding of ecosystems and national resources.
The large-scale surveillance and control operations carried out very recently by these Units have resulted from considerable achievements in the area of securing people and goods. This include combating cross-border organized crime, the fight against environmental and wildlife crime. This has dealt a severe blow to the illicit economy and to cross-border criminal networks.
This very valuable work will be perpetuated and strengthened with determination. The Customs’ Administration also reaffirms its commitment to work in synergy with other Defense and Security Forces, local authorities, intercommunity associations and economic operators to carry out its missions, benefitting both populations and the country’s economy and stability.