VISIT OF THE DGD TO THE GOULOUMBOU UNIT: A brand-new pick-up and congratulations to the men 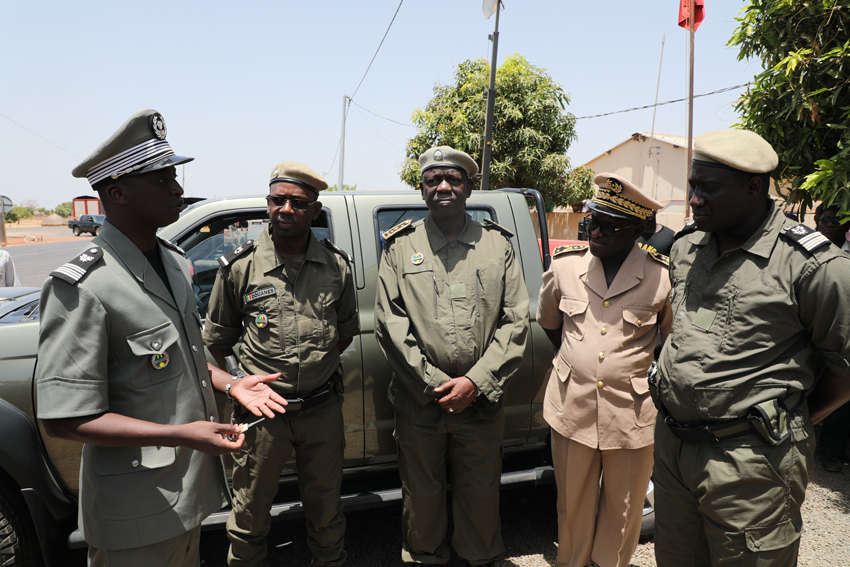 On Sunday 5th, May 2019, the Customs General Director, Oumar DIALLO visited the Gouloumbou unit (Guenoto Station, Subdivision of Tambacounda, and the South-east Regional Directorate. The DGD delegation was composed of the Head of Customs Operations (DOD), the Head of Human Resources and Logistics (DPL), the Head of Public Relations and Communication Office, among others.
Firstly, the 72 kilograms of Cocaine seized on April 29 was presented to the Governor of the Tamba Region and the National Press, at the headquarters of the subdivision. The South-East Regional Director, Georges DIEME, Head of Subdivision of Tamba and that of Kédougou and his men, have, with tact and professionalism, secured, conveyed the product for the purposes of the presentation to the authorities.
While speaking, the Governor congratulated officers who made the seizure.
Bouya AMAR, while characterizing the seizure as historical and heroic, invited Tamba populations to collaborate with Customs in its efforts to protect citizens against such plagues, and for the national economy.
According to the Governor of the Tambacounda Region, “This amazing achievement further comforts the Customs’ Administration in its fight and against organized cross-border crime and for security”,
Heading to Gouloumbou.
On site, the DG welcomed by the Prefect of Vélingara, on behalf of the Governor of Kolda. In his speech, the representative of the State congratulated the customs achievements. In front of other representatives of the defense and security forces, the prefect Abdourahmane NDIAYE stressed the need to join efforts and pool their resources to fight against organized crime. An idea defended by the DG who paid a visit to all the Defense of security Forces and Security present in the area. The Head of the Gouloumbou Water and Forests Brigade, apparently touched by the Dg’s visit, reported on a seizure of a lorry full of rôniers he had handed to his service.
The Head of Customs Operations, responsible for the surveillance and customs clearance units, supported the DG’s idea of joining efforts. He urged his men to stay at the top because they are on “the glorious path to excellence”. He concluded.
On the same occasion, the DG, on behalf of the State and guardianship, delivered a brand new pick-up vehicle to the Gouloumbou unit, as a source of motivation. This vehicle will not only enable the Unit to increase its presence on the ground, but also to ensure the permanent surveillance.
An action that will undoubtedly motivate other units to keep on fighting, for more efficient Customs.
Another key information was the decision of erecting the Gouloumbou unit as a surveillance brigade while maintaining and strengthening the Guenoto Station resources, 15km to the West. Under a blazing sun, on top of all, the DG and his delegation went there to meet officers in service.
On the way to Guenoto, waterfalls, riffles, shrubs and clearings followed one another and punctuated the trip. On arrival at the post office, an old colonial building that still stands on its pillars, verandas disemboweled by the wear of time, giant baobabs witnesses the history of this building created in 1864 and more recent premises that house the offices and rooms of the agents were available for the DG’s delegation. A well and a school equipment complete the landscape and reveal the uncomfortable experienced by the soldiers of economy who serve at the Guenoto line. This situation will soon be a mere souvenir because the DG ordered a repair all that can be the unit more functional. Before leaving Guenoto, the General Director signed the unit’s registry  by giving precious advice to Lieutenant Samba Doucouré DIOP and his team for more speediness in the work.
The day before his departure for Tamba, the DG stopped at Kaffrine, Koungheul and Koumpentoum to meet the Units along the Kaolack-Tamba road. Upon arrival at Tamba at about 2 pm, he made courtesy calls to the Governor of the Region, the Commander of the Military Zone and the Chief Commissioner.