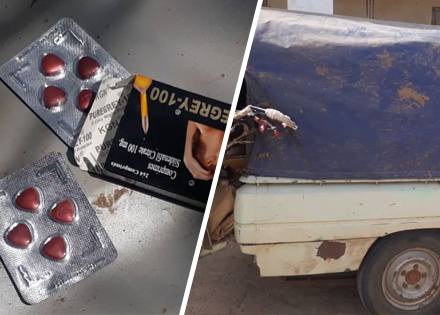 The estimated seizure of 1 billion 43 million CFA fake medicines including antibiotics and aphrodisiacs occurred on Saturday 23 march, in the night. The Foundiougne Maritime Brigade operated to this very large seizure in one week. Intelligence and a seamless spinning allowed officers to stop the vehicle carrying goods up to Niakhar, on the way Fatick-Bambey. In addition to protecting population mainly the young one from the harmful effects of these illicit drug products, Lieutenant Mamadou Lamine Sakho’s men had also limited the negative impact of this traffic on the economy.
In this operation, professionalism and commitment of the customs officer Alioune Ndiaye constitute an example, according the Fatick Subdivision Chief, Commander Abdou Thiam. Less than a week earlier, the Gossas Mobile Brigade, led by Lieutenant Mamadou Lamine Diène, had seized 340 kilograms of Indian hemp in two days.
In addition to these important seizures, trafficker on a Jakarta motorcycle moving with 7 Kilograms of Indian hemp had been caught by the Fatick Mobile Brigade. The offender is then brought to justice for the purposes of law enforcement.
Reopened only in November 2018, the Fatick Customs Subdivision is proving the relevance of the DG’s decision to put an additional customs service and security division in the central customs direction.