PARTNERSHIP BETWEEN COTECNA AND AS DOUANES: A new subsidy to AS DOUANES 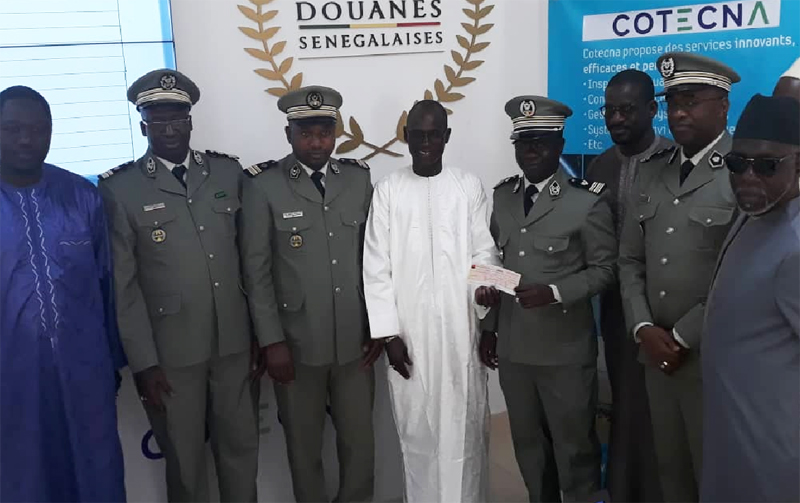 On Friday, February 15, 2019, AS Douane received 12 million CFA francs, the ceremony was held at the COTECNA headquarters, located in the customs ’scanner office in the Port of Dakar,
The check was handed to Colonel Ahmadou Thioye, the Sporting Customs Association (ASD) deputy chairman, by Assane Guèye the COTECNA head of technology department
Various authorities took part in this event. Among them, Colonel Ousmane Kane, Head of the Scanner Cell, Colonel Papa Amadou Gamby Diop, deputy of the Cell Scanner office, Colonel Demba Seck, head of the Basketball Section, the Football Section staff Daouda Guèye and Ameth Tine.
According to the AS DOUANE Deputy chairman, Colonel Ahmadou Thioye, representing the Customs General Director, COTECNA’s financial support has become a tradition. In addition, “it is a way of magnifying the partnership between the Customs’ Administration and COTECNA in the framework of the facilitation measures’ implementation with the use of scanners for the control of importation without intrusion. The Deputy Chairman added COTECNA’s support will allow, “to improve the AS DOUANE’s results, including the AS DOUANE five sections: football, basketball, athletics, judo, taekwondo and shooting and hunting “before thanking COTECNA General Manager Waly Cissé for this invaluable and constant support.
“This win-win partnership built since 2001 and allowed us face many challenges,” said Assane Guèye the Head of COTECNA. In the same logic, he pointed out the role of this company as the customs’ partner: “to assist customs various operations of control and verification of importations”.
Speaking, Colonel Ousmane Kane of the Scanner Cell welcomed COTECNA’s regular support to AS DOUANE. On this occasion he renewed the commitment and availability of Customs to perpetuate this partnership with COTECNA to the benefit of both sides